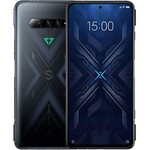 50% The Black Shark 4 Pro Is All-In On Gamer Stereotypes
Origen: The Verge

EN→ES
At the core, there’s nothing wrong with the concept of gaming phones. They’re thicker than your average flagship phone due to bigger batteries, a heat sink, and several other components that you probably won’t find in phones made by Google, Apple, or Samsung. They’re proofs of concept that you can get laptop-tier specs into a pocket-sized device. If only a company made a device with more focused software that doesn’t feel so pressured to lean (in Black Shark’s case, very awkwardly) into the stereotypical lane of what it thinks a gamer wants in phone software. It’s really not a good look. For all of the power and high-end tech that’s bundled in gaming phones, they aren’t great all-around picks for people who want great software, boundary-pushing cameras, and a more appealing device around the edges.
Único Análisis, disponible online, Mediano, Fecha: 04/26/2022
Puntuación: Puntuación total: 50%
Black Shark 4 Pro Review: Physical Triggers For The Win
Origen: Lowyat.net

EN→ES
As far as gaming phones go, the Black Shark 4 Pro is a solid entry in a long line of gaming phones. Its key feature which lets it stand out from the rest is the physical shoulder buttons. These not only allow it to perform its usual macro duties in-game but also serve as additional shortcuts while in everyday use. And this is a major plus if you like snapping photos with your phone, since it can both serve as the shortcut to launch the app, as well as the physical shutter button. Though while playing games, the Black Shark 4 Pro can get pretty warm. This is not alleviated by the case that comes in the box – at least, not by much. And while running GFXBench, it got to a point where it feels as hot as a kettle. Unfortunate heat issues aside, the physical keys make it a very compelling phone to get compared to other gaming phones on the market. Though despite that, it has to be pointed out that despite getting into the local market earlier this year, it was announced in March of 2021. If you’re okay with getting a gaming phone that is a generation behind but still plenty powerful for most uses.
Único Análisis, disponible online, Muy largo, Fecha: 04/17/2022

EN→ES
The Black Shark 4 Pro is an exceptionally well-built gaming phone, with all the nuts and bolts that we've come to expect from one. Better yet, its $579 starting price undercuts most of the competition, without compromising on processing power and functionality. Just be prepared for the device's heavy skin over Android, a slower cadence of software updates, and middling battery life. If you can get over those shortcomings, the Black Shark 4 Pro may be the gaming phone for you.
Único Análisis, disponible online, Mediano, Fecha: 03/29/2022
Puntuación: Puntuación total: 80%
80% Xiaomi Black Shark 4 Pro review
Origen: Techradar

EN→ES
So, at the end of the day, the Black Shark 4 Pro. Is it worth buying even after a year since its debut? There are two variants that you can choose from. However, I do advise you to wait for the upcoming Black Shark 5 to be released first since it should be announced soon. After that, maybe the price of the Black Shark 4 Pro will drop to about RM2.5k or lower? Anyway, that’s all I have for you today – the Black Shark 4 Pro is still a very powerful phone given that you have some way to protect your hands roasted by the phone.
Único Análisis, disponible online, Mediano, Fecha: 03/17/2022

EN→ES
The Black Shark 4 Pro is a capable gaming phone, even with a 2021 spec. While the gaming phone's Snapdragon 888 is beginning to look old compared to 2022 gaming phones, benchmarks show that the manufacturers have squeezed every drop of power possible for chart-topping benchmark results, even when compared to phones with the upgraded Snapdragon 888 Plus. It really is an impressive feat of engineering, and that translates to a high-end mobile gaming experience devoid of freezing or lag. It is worth mentioning that it's not technically the fastest Black Shark, with the follow-up Black Shark 4S range – with a Snapdragon 888 Plus – readily available in China. But, given the delay with the Black Shark 4 Pro, it’ll be a while before that graces UK shores (if ever). If you’re more focused on the core gaming experience than the specs, the Black Shark 4 Pro is still a tempting option.
Único Análisis, disponible online, Muy largo, Fecha: 02/18/2022
Puntuación: Puntuación total: 80%
80% Black Shark 4 Pro review: Not just for gamers
Origen: Pocket Lint

EN→ES
With so many manufacturers going after that skinny-bezelled sleek look for their smartphones, it's refreshing when a phone comes along that's different. The Black Shark 4 Pro's priority is all about practicality: giving you a big and bright screen, big sound, but therefore being that bit bigger than your usual. But does that really matter? But if you are a gamer then a feature that makes a real difference is the Black Shark 4 Pro's two physical trigger switches. These pop out of the phone's frame, giving you something tactile to press, which gives an advantage in fast-paced games where you don't want the screen blocked by your fingers. Sure, the camera system is a bit of a letdown, but we're not sure that's going to be a major red flag against a device such as this. The Black Share 4 Pro is one accomplished piece of kit that blurs the lines between gaming phones and affordable flagships. We think it's fantastic - whether you're a gamer or not.
Único Análisis, disponible online, Mediano, Fecha: 02/18/2022
Puntuación: Puntuación total: 80%
83% Black Shark 4 Pro Review — Setting The Benchmark For Gaming Smartphones?
Origen: Pokde

EN→ES
Starting from the price of RM2,599, the Black Shark 4 Pro is a worthy offering in the gaming smartphone market. It offers several top-of-the-line specifications and it does rather well when it comes to gaming itself. There are pros and cons as you’d expect. The review unit that we had is slightly different from the one offered in Malaysia, where it comes with 12GB RAM mated to a 128GB internal storage. If anything, I wished that the battery would perform slightly better. There is the speedy 120W fast charger however to combat that and get you up and running in no time. After all is said and done, we award the Black Shark 4 Pro with our Silver Pokdeward.
Único Análisis, disponible online, largo, Fecha: 02/03/2022
Puntuación: Puntuación total: 83% precio: 83% rendimiento: 87% movilidad: 80% procesamiento: 86%
Black Shark 4 Pro – Flagship performance in Gaming Smartphone
Origen: Tech X Reviews

EN→ES
There is no doubt that we live in the golden age of video games online for mobile. That is why smartphones have become a great place for such games due to the fact that the number of users who are interested in mobile games is increasing day by day and even games like PUBG Mobile and many other games are getting more developed and improved and this is what makes it so graphics demanding. Here comes the Black Shark 4 Pro, one of the best gaming smartphones that provide the user with everything he wants for an enjoyable gaming experience from a powerful processor, smooth screen, giant battery, and ultra-fast charging. The most important thing that distinguishes this type of device is a dedicated gaming mode, internal cooling system, accessories for the gaming experience, and many more other advantages. Does this phone really come with the best gaming specifications and features?!, This is what we will talk about in detail in our current article.
Único Análisis, disponible online, Muy largo, Fecha: 01/24/2022

EN→ES
The Black Shark 4 Pro is a gamer’s phone and is well-suited for that purpose, thanks to its smooth feel and accurate touch during play. However, its overall lack of readability (especially outdoors), its imperfect color accuracy, and its HDR10 playback performance make it less suitable as an all-purpose device.
Único Análisis, disponible online, corto, Fecha: 12/22/2021